Walking down a street right now in Shanghai, one would be forgiven for thinking that the pandemic never happened. Sometimes it is even difficult to spot someone wearing a mask.

Dig a little deeper, however, and it’s clear that recent events have had a profound impact on the Chinese economy. Foreign investment and exports boosted China’s economy for nearly two decades after China’s entry into the WTO. But now things have changed.

The pandemic has highlighted how important exports are to the Chinese economy. It has also exacerbated existing friction between China and other countries, highlighting how dependent China has become on imports of key components and materials. On the flip side, the pandemic has revealed how dependent global supply chains have become on inputs made in China.

To some extent, the events of this year have only accelerated the de-globalization trends that were already underway. But with economic decoupling expected to continue, China’s old economic model appears increasingly unsuited to the post-pandemic world. 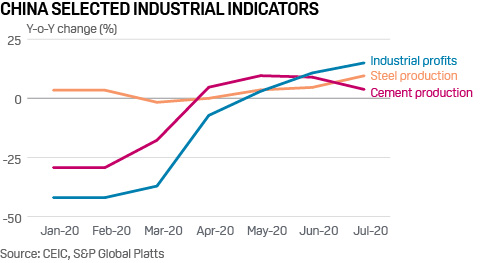 But in the short term, the government has had to fall back on investments to support the economy, which S&P Global economists predict will grow only 1.2% this year.

Once again, the government has used infrastructure to create jobs and support the economy. Sales of excavators and front loaders in the first seven months of this year are up 15% from last year and steel production is at record levels. But this stimulus package is a little different.

Last hurray for the old economy?

Along with urban renewal and major transport and water conservation projects, the government is also prioritizing investments in what it calls “new infrastructure”.

Total investment is estimated at 1.2 trillion yuan ($ 158-187 billion), which is relatively modest compared to estimated spending of 17 trillion yuan for all infrastructure in 2019.

But the government hopes this initiative will speed up construction of the data and communications networks needed to support the development of e-commerce, smart manufacturing, and smart cities with internet-enabled transport and energy networks, all powered by the Internet. AI and data collected from the millions of digital measuring devices and sensors that form the backbone of the industrial internet. Well, that’s the vision anyhow.

This opens up opportunities but also presents challenges for the energy sector. This doesn’t mean that China is turning its back on heavy industry – China is going to need coal and steel for decades to come. But investments will increasingly be focused on areas that support domestic consumption and help the country become more self-reliant.

This means investing in emerging industries such as new materials, robotics and biotechnology, as well as the transformation and upgrading of basic manufacturing, improving it so that it can meet the needs of domestic consumers.

It also means big investments in areas that will make China less dependent on imports. Developing domestic skills in areas such as semiconductors will be a priority, as will strengthening energy security to reduce China’s ever-growing thirst for imported oil and gas.

This will require additional investment in domestic production, especially in unconventional natural gas, a segment that Chinese oil and gas majors will continue to develop. In the first seven months of the year, natural gas production increased 9.5%, growing significantly faster than oil or coal production during the same period.

As petrochemicals and aviation fuel will experience continued growth, the increasing use of electric vehicles and the electrification of public transport pose an existential threat to Chinese oil and gas companies. 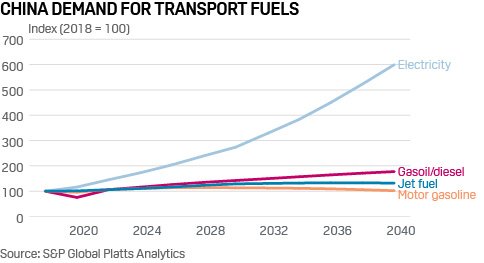 S&P Global Platts Analysis Chinese gasoline demand forecasts will peak around 2025, with diesel peaking a decade later. With the market for two of their key products on the verge of declining, Chinese energy companies will need to look not to exports but to China itself to find new markets and business models, to continue to be relevant.

Sinopec has already started this journey, installing electric and hydrogen charging facilities at some of its service stations. CNOOC has created a company to develop an offshore wind activity. Its project off the coast of Jiangsu is expected to be connected to the grid by the end of this year.

The industrial internet, big data and AI will likely be able to improve efficiency and reduce costs. Alibaba, one of China’s leading technology companies, says that by applying machine learning to real-time data from wind turbines, they were able to predict in advance when they would fail, reducing operating costs. and maintenance of a wind farm of nearly a third. .

Sinopec has introduced an industrial cloud platform in some of its refineries to optimize production and reduce costs. Downstream, it is developing digital transaction platforms and e-commerce channels to better secure the market for its chemicals and refined products.

But to be truly transformative, these technologies must capture and analyze real-time data not only along individual energy value chains – from generation to distribution and consumption – but also across them, where energy systems oil, gas, coal and electricity interface. and interconnect. Better coordination and optimization across the energy system could help increase the role of renewables and decentralized generation in China’s energy mix.

China isn’t the only country hoping to harness big data and digitization to transform its economy. But its state-led development model, with its ability to allocate and coordinate investments in the new digital economy, could mean it will get there faster than others.

The 14th five-year plan, which will be released next year, will contain more details on the government’s ambitions and goals for China’s new economic model. The transition can be gradual and gradual, but the direction of movement is clear. China’s centrally planned, digitally coordinated, consumer-driven economy is beginning to take shape.