This week’s Conservative Party conference took place on the planet Boris Johnson – a world in which collapsing energy companies, skyrocketing gas prices, gasoline and food shortages, and sharp cuts in universal credit are miraculously absent. In the frozen north of the planet Johnson sits Frostland, a small outpost led by the government’s “chief negotiator for Task Force Europe”, David Frost.

Frost’s avowed job is to ensure a smooth transition to good post-Brexit relations between the UK and the EU27. He continues this task by engaging in repeated shootings against the EU. These are mainly attacks on the Northern Irish Protocol, of which he was the co-author (something Frost seems to have forgotten), alleging that the negative consequences widely foreseen before its entry into force (notably by the northern trade unionists Irish) are the result of bad faith actions on the part of the EU. Surprisingly, things are not going very well.

But during the conference, Frost’s foray into altered reality entered a new dimension. Addressing the Conservative Party loyalists, he succinctly summed up the difference between UK and EU business models: “We know there is only one path to prosperity: free. business. We have failed to push back our country’s EU borders with Brexit just to import a European economic model.

Where to start with this one? Well, after you stop grinning at the images suggesting Brexit was akin to repelling an enemy invasion, you can note that nine EU countries have higher GDP per capita than the UK. You might point out that in terms of output produced per hour, UK productivity is over 10% lower than Italy, over 22% lower than France, and over 26% lower than in France. that of Germany. You might laugh at the absurd implication that there is no free enterprise in the EU. And once you’ve seen through the laughable caricature of the EU as a state-run federalist conspiracy in which freedom and prosperity are banned, you might smile at the bizarre idea that Europe has a model. unique economic. Greece? Just like Sweden. Portugal? A carbon copy of Denmark. Croatia? Spitting image of Belgium. Obviously.

But let’s put aside the small factual corrections and take Task Force Europe’s chief negotiator at his word. What have the major EU economies taught us about prosperity? Strangely enough, a lot.

Thank you for subscribing.
You will begin to receive emails from The New Statesman.

Take Germany: with its reunification after 1990, the most successful politico-economic project of my life, it is the most successful exporting democracy in the world. How did Germany become so prosperous? Not through the abandonment of private enterprise, but through a commitment to organized private enterprise rather than Anglo-Saxon laissez-faire capitalism. The German economy relies on a comprehensive system of laws, regulations, partnerships and public institutions, all interconnected to produce a business model renowned for generating well-paying, highly skilled and highly productive jobs.

It may surprise Frost to know that this system is built on a thriving private sector economy. Germany has never played with nationalization on a scale close to that of the United Kingdom. The backbone of Germany’s economic success since 1945 has been the small and medium-sized enterprises of its Mittelstand. German industry is highly organized and operates sector-wide education and training in collaboration with the formal education system (split between academic and technical specialties). The supply of highly skilled labor means companies can invest much more in research and development than in the UK. This in turn connects to banks providing longer term capital and allows employer-union relationships to be collaborative and strategic. Yes it has issues, and yes it is a scalable model. But if you want a gold standard for a high productivity economy, you will probably start with Germany.

What do countries like Germany have to teach Frost and Johnson in their new embrace of an improved vision of high wages, high skills and the future of Britain? That high wages come from economic systems that produce high productivity, and not the other way around. These leveled, high-productivity economies are the result of the interplay between organized systems of industrial relations, research collaboration, education, bank-firm relationships and coordination between firms. This constant collaboration between unions, employers and government (national and regional) is essential to maintain the incentives and behaviors that keep the “high everything” model going. 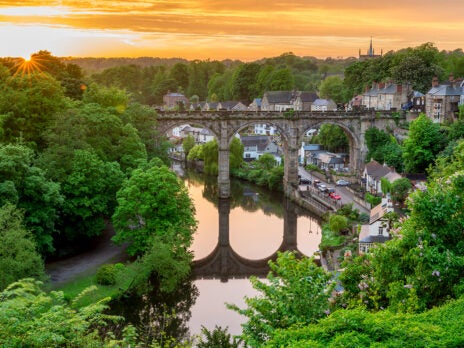 Of course, the UK must find its own path to higher productivity, and not emulate other countries whose comparative advantage and economic activity are so different. But what a thriving economy like Germany shows most clearly is that overcoming Britain’s disease of low productivity will be a long-term national mission that requires business partners and political parties to work together to rethink the how our economy works.

Instead, Johnson’s path to higher productivity so far has one point: forced wage increases in industries with labor shortages caused by Brexit. Meanwhile, Britain is on the brink of a period of painful public austerity, open conflict between business and government and serial waves of energy price shocks. As the plans move forward, it is beyond ignorance. Is this why we have “pushed back the borders of the EU”? Well, at least Frostland is warming up with the delusional thought, “Finally free, finally free, thank goodness we are finally free.”

[See also: Boris Johnson is asking for trouble by promising a high-wage economy]